Submitted by an member of the Amazon.com Michael Jackson Forum.

It seems we cannot download the video onto personal PC's, but
it will be here to see. At least for a while.

Everyone who is about love says it is wrong to hate, but Lord I hate this man.
Click to expand...

Have you ever read Michael's FBI File? The entire file is 442 pages, but there are only 135 that deal with investigating allegations.

That is not a lot for the "World's most famous" molester in all history.....is it? As a 21 yr Military Vet I can state with certainty mine is larger. If you haven't you should and if you haven't read it since early 2010 you need to read it again.

17 years of investigating, over 90 Federal Agents either analyzing media material, DNA samples, books and interviewing potential witnesses/victims, and surveillance. And nada..... (Dimond claims the FBI did not do enough, try hard enough)

MJ's file is actually 7 reports with 98 pages withheld. The withheld documents are to protect informant's identities during the death threat and allegation investigation, and Secret Service/FBI tactical strategies. (according to the FBI website)

Report #1 Is 199 pages it was initiated 7/23/92 and deals with an attempted extortion and death threat against Michael and George Bush Sr.

Report #2 is 59 pages it was initiated 9/16/93 although the original contact with the LA DA's Office and the LA FBI Office occurred 9/7/93. It is this report that the Media pronounced "scandalous"" and "lurid" upon its' release, and that Haters and Media persons in Troll disguise (D. Dimond = toocoldout) try to use to defend the lies and rack up phantom victims like a bowling score.

The most scandalous part of this report is the use of 4 Tabloid stories as evidence and that one of the stories has Jordie's picture and Evan's info on it, released during the time the Media was supposedly still trying to figure out who the Chandlers were.

Report #3 is 44 pages it is called a "CART SERVICE REQUEST" and in my opinion one of the more fact fill of the reports. It is here you find out that Sneddon & Gang and the FBI were aware prior to the Grand Jury that there was no child pornography or evidence of a conspiracy to kidnap on the 16 computers analyzed (UNDER THE EYES OF THE SB DETECTIVES)

The most interesting information on Report #3 starts at P.37. It has to do with converting Graphic Files from MJ's proprietary DVD using a specialized format to one where the file can be viewed by a standard CD or DVD Player. AFTER the forensic analysis. (There is no mention of the converted media in the court documents nor are they used as evidence during the trial.)

Report #4 is 10 pages initiated by the London FBI Office it is the one which addresses the Tabloid stories and will become part of Report #2....But here is the interesting part. This report was initated 9/2/93 that is 5 days before the LA FBI was supposedly contacted by the LA DA's Office and 8 days before they would have their first meeting. (by numerical filing and date initiated this should be report #2 but for some reason it is not)

Report #5 is 9 pages. It is the repetitive attempt to turn one VHS tape into a "P" video collection. Nothing found......ever.

Report #6 dated 2/27/04 is 18 pages of begging and pleading with the FBI to help the DA make a case. It is a formal request
that a new report be initiated. During this period the 10 books are evaluated by the FBI's Behavior Analysis Unit # 3 (child exploitation) division. The books were also analyzed prior to the Grand Jury. There are some interesting notes on p. 7 from the then Agent in charge. On Pages 13-17 Sneddon tries to introduce more phantom victims from NY and FL.

Report #7 dated 9/14/04 is 5 pages. It is a last ditch attempt to salvage a non-existing case. The FBI visit Jordan Chandler in NY. Well you know how that went.
(so much for not knowing where he was or he was in Europe)
D

Read: Authorities: No Evidence Michael Was Ever a Pedophile

There are several fan made and exploitation videos out about the raid. This one I had not seen until yesterday.

My Uncle was a Cop, retired as one he had every case notebook he ever filled out and while I'm sure he wasn't all sweetness and light on the job would not have condone this.
D

I am placing this information here to introduce a site new comers might not know about. It is important to understand the Media's refusal to talk about this subject is their way of keeping Michael's image burdened.


All you wanted to know ABOUT IT but were afraid to ask. Part 1. CIRCUMCISION or ERECTION?

Americans seem to be grossly underestimating the importance of Jordan Chandler’s big mistake - he described Michael as circumcised while in reality he was NOT. I racked my brains about “Why they don’t understand the crucial importance of it?” until I came across a medical site which explained that the overwhelming majority of American men were circumcised. So this is the answer… Males (and females) in the US have practically never seen what non-circumcision is like and don’t know the difference. And probably think that the matter is as minor as the eyelashes just being longer than usual. No, dear me, it is MUCH MORE than that…

Is it possible to mistake someone with a scarf on the head for a person whose head is bare?

Will you be able to still see the difference if the scarf is the same color as the hair ?

Well, if you can’t see it — will you still feel it if your hand touches it?

See what I mean?

Thanks to Lynette of Vindicating Michael there are now rarely before seen photos of the aftermath of the search. The photos were used to make a scientific point about DNA test. The entire discussion was a hotly contested dialog btw the Admins of Vindicating Michael and a person who has a very long history of hating Michael. The discussion, the analysis and conclusions are great. If you have not read please do so.

To people who are familiar with areas where Police raids are a common occurrence, where in secreted places which cartels hide enormous amounts of cash and drug supplies or perhaps a terrorist cell storing WMD within the walls and floor of their buildings this would seem not so shocking, but to see just this small example of such deliberate destruction of a family home that opened its doors to the delight and for the enjoyment of its neighbors and visitors from around the world these pictures appear a wanton display of disregard by people who cannot believe in innocence for its very sake I enlarged the 2nd photo because that white material on the floor is MJ's mattress it came from his bed which was in another room and I wanted you to get a good look at it.
D

Now make something out of this room other than what it was.
Ohhhhhhhh My Goodness Quick Hurry I Got Me ANOTHER "secret" room 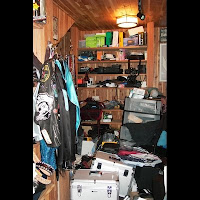 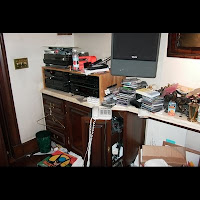 Yep this is real sinister alright. Uh wait this looks like my walk-in closet
one front door and one side door leading to the walkway.
D

​
According to another news article about this photo: The dramatic footage was captured by the police department and shows police barging into Jackson’s bedroom and even drilling into his safe.

The below article says this is how the bedroom looked upon entering it. (so did Michael or the Maid/Housekeeper make up the bed with dirty linen and clothing on the bed and in the closet knowing he would be gone for several weeks?

Place held for photo of "supposedly" secret room which is in fact a basement type room showing the outer wall made of bricks with steps leading downward. (Will post as soon as photo is located)

One of the most closely guarded secret of the 2003-2005 investigation & trial is the actual cost.

I am starting from the beginning, again reading Aphrodite Jones' Conspiracy.
Here are some of the things I missed or forgotten.

1) The SB DA's office had nine (9) fingerprint experts. (Bet there wasn't that many for the 911 investigation)
2) Accident reconstruction experts
3) Computer graphic experts
4) DNA experts
5) Forensic accounting expert (wasted money for the trial, but it did give DA a look a Michael's contracts and money)
6) Finance expert
7) Criminalists
8) Telephone, acoustic, security systems experts
9) Child molestation experts
10) Pathology
11) The DA's office held numerous "mock" trials. (They practiced and still came off looking like....wonder how bad it was before practicing???....Sheesh)
12) PR firm used. (wonder who recommended them Chandler/Feldman) or did they really volunteer.
13) Called upon almost every Federal and International agency known for leads.
14) Jury consulting expert ***
Note: *** The jury consulting expert was the same which were hired to help the prosecution convict McVeigh, M. Stewart & S. Peterson

Whether the Santa Barbara DA's office use the services of County, State, Federal and International agencies or hired contractors this partial list adds up to far more than 4 million dollars. People had to get paid.


The only good thing about Number #5, the Forensic Accountant is he checked all of Michael's opened and closed bank accounts for previous years looking for money paid out and did not find any that could not be legally accounted for. That means all of the Damned Checks for millions of dollars that people claimed to have seen which were meant to pay off various boys was disapproved by Sneddon and proved them to be bullshit liars....... Another piece of connecting the Dots overlooked by "investigative journalists. Had there been just one suspicious looking check to any boy or his family Dimond would have shouted it from the roof top.