Arnie Klein: I Did Not Betray Michael Jackson
Originally posted May 2nd 2010 12:08 AM PDT by TMZ Staff

Dr. Arnold Klein -- Michael Jackson's long-time best friend and physician -- tells TMZ he did not betray Michael Jackson by claiming to TMZ that MJ had an affair with Klein's office manager ... and he's freaked out that he's getting "a lot of horrible death threats." 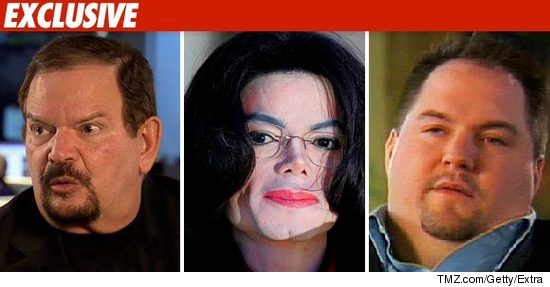 Klein and office manager Jason Pfeiffer were featured on "Extra" a few days ago -- during the interview Pfeiffer claimed to have had a romantic relationship with MJ. Klein called in during TMZ Live last Friday, and said Michael was gay and Jason was "the love of his life."

On Saturday, Klein told TMZ he does not believe he betrayed Jackson because Jackson never tried to hide his sexuality. We called Klein out on his statement, because it seems to us MJ went to extreme lengths to keep his sexuality a secret.

Klein told us Saturday, "Was he gay? Yes." He then went on to say his declaration is meant to shoot down rumors that Jackson was a pedophile. And, Klein says, as far as he knows, Jason's alleged two-month relationship is the only gay relationship Jackson ever had.

Pfeiffer says, "Michael was not ashamed of his sexuality."

Klein and Pfeiffer say they have received numerous "horrible death threats" since their statements became widely public this week. They have both been in touch with the FBI and now say they have bodyguards.

WHAT THE HELL IS WRONG WITH THESE PEOPLE! There are so many things wrong with this claim(s) I don't know where to start.

The very first line is wrong " Michael Jackson's long-time best friend and physician ". If MJ had a best friend it would have been Liz Taylor. Why can't these people grow some CLASS!

I can't write anymore I am too livid to speak.

ing
I will remember you.

Yeah, I read this a few days ago when it came out! I was mad at first but I am over it now! If Michael was gay he could have done a lot better then that guy! Anyway tv.com posted an article that deserves giant KUDOS about this!

Two men who claim Michael Jackson was gay have become the targets of death threats from outraged fans and supporters of the late pop icon. Dr. Arnie Klein, Michael Jackson's dermatologist, claims the singer had a gay relationship with his office manager Jason Pfeiffer. Both men say they have received "horrible death threats" since they went public about the alleged gay relationship.

In an interview with Extra on April 29, Jason Pfeiffer alleged he had "passionate and sexual" relationship with Michael Jackson starting in 2008. The following day, Dr. Arnie Klein came out in support of Pfeiffer's claim, telling TMZ.com that Michael Jackson was gay and the singer's office manager was "the love of his life."

"We definitely hit it off the first time we met," Pfeiffer told Extra. The two allegedly met at Dr. Klein's office and their relationship became intimate a few months later. "I just assumed that he was probably bisexual," Pfeiffer said. "I know we loved each other, I know he told me that all the time. I believe that he was probably my soul mate."

Klein told TMZ.com he went public with his claim to help dispel rumors that Jackson was a pedophile. He also claims Jackson "was not ashamed of his sexuality." In his interview with Extra, Pfeiffer said he wanted to "set the record straight" because Michael Jackson "would have approved."

Both Dr. Arnie Klein and Jason Pfeiffer said they have received "horrible death threats" since they went public with statements that Michael Jackson was gay. The threats have been reported to the FBI and both men have hired on bodyguards.

We think if Michael Jackson was gay, or bisexual — or whatever — and he really had wanted people to know, he would have said it himself. In our opinion, Klein and Pfeiffer are basically just fame whores trying to make themselves feel more important by invoking Jackson's name to get media attention. Well, they got our attention alright and we're calling them out for being total asshats.
http://www.tv.com/michael-jackson-gay-a ... 74100.html

What a couple of insufferable morons. Mike was surrounded by garbage. There has only been maybe one professional person (Tom Mesereau) who hasn't acted a goddamn fool. Truly.

I think maybe Klein and that guy are/were lovers and they came up with this $hit...for whatever reason assholes do things like this.
Top

I sure don't believe this guy was Michael's lover, he just wished he was. So Michael told the guy he loved him, Michael said he loved many people from family to friends to fans he loved them because he liked making people feel good about themselves and happy. I'm pretty sure like most of us, Michael only had a very small select group of people he truly loved. And I'm 100% sure Michael just thought this weirdo was a nice man and nothing more than that. I'm very sure Michael wasn't gay or bisexual.

As for Dr Arnie Klein, what is fact and fiction is a total blur with him. He say's he presumes Michael and Debbie had sex to produce Prince and Paris. He also claims it's possible he's the father of Prince and Paris etc. Dr Arnie Klein always appears quite doped up in medication to me, and just rambles on with crap when he talks. I have nothing against gay people, they are good and bad like anyone else. But this sweaty and unhealthy look man who would like to think he was Michael's so called gay lover, and Dr Arnie Klein are the worst stereotypes of gay people, in the way they want someone who was a friend and associate like Michael to be gay just because they are.

[quote name="whisper"]What a couple of insufferable morons. Mike was surrounded by garbage. There has only been maybe one professional person (Tom Mesereau) who hasn't acted a goddamn fool. Truly.

I think maybe Klein and that guy are/were lovers and they came up with this $hit...for whatever reason assholes do things like this.[/quote]

Klein is a liar, just look at the TMZ interview he did a few months ago. He is in deep shit and I think he is trying to cover his ass. He has to explain why MJ went so often to his office in the last months of his life.
Top

Seriously- Does he look like Michael Jackson's type? MJ said he likes "cute". JP says he has voicemails, so what, so does Glenda!

Where did Michael find these frienemies? Arnold Klien is single handedly trying to ruin MJ's legacy:
He pees in cups.
He pees in front of people
He is Paris and Princes father
Sending a lawyer to court in custody hearing for MJ's Children
.................. on and on

The more this man talks the more I ache for MJ. He was surrounded by pit vipers.
I will remember you.

[quote name="shelly"]He has to explain why MJ went so often to his office in the last months of his life.[/quote]

This is wht I wanna hear from him! EXPLAIN KLEIN IF U WANT TO TELL THE TRUTH!!

Are we supposed to feel bad that they are getting death threats? I don't think any MJ fan would actually hurt them. I think they are just trying to scare them. Maybe they will think twice before spouting stupid sh*t!
[align=center]

[quote name="Ben"]This guy Jason say's he was Michael's so called gay lover, has the look of a liar in his eyes [/quote]

This is what I thought, Ben.. :yuck

[quote name="Jeniffer30"]Are we supposed to feel bad that they are getting death threats? I don't think any MJ fan would actually hurt them. I think they are just trying to scare them. Maybe they will think twice before spouting stupid sh*t![/quote]


You can say that again, Jen... They're trying to insinuate it's Mchael's people making death threats but they're just making that up!

It always amazes me how negative, untruthful stuff goes viral on the net ...

You know Conrad Murray said Klein showed him how to give propofal. How much you want to bet that's the truth? Michael's was in Klein's office more than the "norm." Klein needs to be in a jail cell next to Murray.

[quote name="whisper"]What a couple of insufferable morons. Mike was surrounded by garbage.[/quote]
That pretty much sums it up! I cannot believe the evilness of some people and I swear to god, if I ever catch Klein on the streets of Chicago, I'mma throw something at his sorry ass. I was livid when I read this. Even if Michael was gay, which I don't believe he was, who the f*ck are you to go putting his business out on the street like that? You piece of sh*t! Further more, Michael can do better than this asshole! Ugh, Michael, where the hell did you find these people?

[quote name="MJfan01'"]You know Conrad Murray said Klein showed him how to give propofal. How much you want to bet that's the truth? Michael's was in Klein's office more than the "norm." Klein needs to be in a jail cell next to Murray.

Users browsing this forum: No registered users and 12 guests