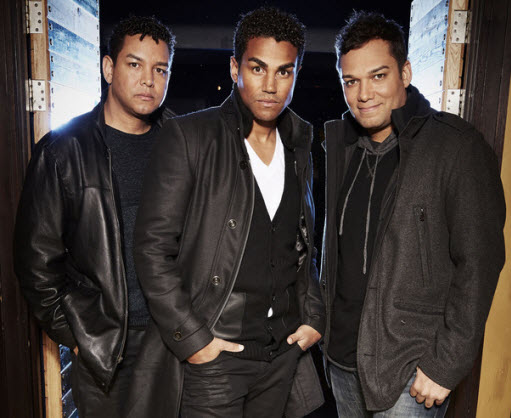 There's just one band left to meet properly on The Big Reunion - yes, it's time for 3T to step up to the plate with talk of their aunt's nipples, being a Jackson and intense games of Pictionary. As if that wasn't enough, this episode also saw Eternal and A1 meeting up again, so it was packed full of juice. Read on to find out what we learned from the installment...

1. 3T really were properly successful back in the day.
Yes, yes, they had the Jackson connection, but seriously - in 1996 they were ranked second only to the Spice Girls as the biggest-selling group in Europe. That's intense. Of course, it basically ran in their veins, and there was super cute home video footage of them as children having a go at the old music thing.

2. Michael Jackson refused to let 3T break into showbusiness as children.
The guys say that the King of Pop taught them a lot, but one thing he didn't do was let them get into the business too early. Adorably, Taryll revealed that they used to pretend to be the Jackson Five ("Sometimes I would be Randy and Jackie...") but Michael wouldn't let them grab on to a record deal when they were too young. "He wanted us to enjoy our childhood," TJ explained. That's both sweet and sad, because it suggests Michael didn't really enjoy his own childhood fame, doesn't it?

3. 3T's career was unexpectedly halted, volume one
The guys' mom Dee Dee "spearheaded" their career plans when they were kids, Taj said, but things got shaken up when she divorced their dad Tito in 1988. "I was 11 years old, living in a fairytale, everything great, and it came to a screeching halt," TJ said. But Michael was there to help them out.

4. 3T's career was unexpectedly halted, volume two - and this one is a real tragedy.
This was so hard to watch, but 3T signed a record deal in 1992 (TJ was just 14), and with their album two-thirds written in 1994, tragedy struck. Their mom was found dead in suspicious circumstances. Unsurprisingly, the boys decided that music wasn't really their priority at that point. "I couldn't cry like I wanted to cry in front of them," Taj said. "I had to be the strong one, the older brother, like she told me to be." That is just so sad. What a terrible thing to go through. Again, Michael was a source of comfort for them, and Taryll said he kept them motivated by reminding them to make their mom proud.

5. For some reason, all anyone cared about when 3T started out was their uncle.
In 1996, the guys decided to release an album and single... and guess what? The record label wanted them to release 'Why', which featured one Michael Jackson. Good on the boys for refusing and getting 'Anything' out there, though. Still, that didn't stop the MJ talk: "There was always something they wanted from our uncle in order to play us," TJ said. "Like, 'We'll play your song if you get us a giveaway to Neverland for our listeners'." Harsh. No big surprise that 3T skipped America and went to Europe, is it?

6. 3T's career was unexpectedly halted, volume three
Again, it's totally understandable, but 3T kind of put the whole music thing on the back burner in 1997, when they got the trial date for the wrongful death case regarding their mother. "It was hard to relive all that and be face to face with that guy," Taryll said, in what must be a huge understatement. When her ex-boyfriend was convicted of second degree murder, obviously it took a long time for the boys to get motivated by music again.

7. 3T's career was unexpectedly halted, volume four
Yeah, these guys really don't have much luck. After Michael inspired them to get back in the studio, they began work on their new album, picked a single and were all ready to go... and then Michael publicly went to war with Sony head Tommy Mottola ("He's mean, he's racist, and he's very, very, very devilish"). 3T ended up as "pawns in a huge chess game", as TJ put it, and were basically stuck on their label. Luckily, they could fall back on auntie Janet, who got them free of Sony - but they couldn't take their album with them. "We didn't do anything wrong," Taryll sighed. "It's just... we are who we are." At this point, they all felt pretty depressed. TJ "checked out", and Taj lost his "identity".